Diving straight into reverse-engineering iOS apps can be daunting and time-consuming. While wading into the binary can pay off greatly in the long run, it's also useful to start off with the easy wins, especially when you have limited time and resources. One such easy win is hunting login credentials and API keys in iOS applications.

For the first two methods, we can simply expose these secrets using static analysis and grepping through the decrypted app files as covered by Ivan Rodriguez. For obfuscated secrets, we can short-circuit the obfuscation and save ourselves hours of reverse-engineering through the magic of Frida's dynamic analysis. This was how I extracted AWS client and secret keys for a bug bounty program.

The following walkthrough assume that you have set up your iOS testing environment according to my iOS app pentesting quickstart post.

Static analysis begins with extracting your target .ipa file. Make sure that you have installed iproxy and frida-ios-dump.

At this point, you should see a bunch of files in the AppFiles directory. While the files obviously differ from app to app, here are a few keys files to look into.

Info.plist and other *.plist files: Info.plist functions similarly to manifest.json for Android apps. It contains app metadata and can point out weaknesses or new attack surfaces such as custom scheme URLs. Of course, it can also contain stored credentials. You can use macOS' built-in plutil command to lay out the data nicely in JSON with plutil -p Info.plist.

Some plist files can be stored in binary rather than XML, which makes it harder to parse directly. Run plutil -convert xml1 Info.plist to convert them back to XML.

Quick tip: while GoogleService-Info.plist exists on many apps and includes an extremely juicy-looking API_KEY value, this is not a sensitive credential. It needs to be paired with a custom token to have any impact. Not all API keys are created equal; some have proper access controls and can be exposed without risk. Check out keyhacks to quickly identify and validate sensitive API keys.

You also want to begin grepping and parsing through the various files; grep "API_KEY" -r * or similar is a quick and dirty solution.

At this point, you should also poke at interesting files that hint at vulnerable functionality. Check html files (maybe an internal URL scheme vulnerable to DOM XSS?), templates, and third-party frameworks that could have known vulnerabilities.

With luck, you might walk away with a straightforward credential exposure.

Most times, it won't be that straightforward. Nevertheless, there are clues that might point you towards obfuscated credentials.

In one bug bounty program, I noticed that the app I was testing uploaded profile pictures to an S3 bucket, but the request was hidden from interception and the credentials were not stored in plaintext in the app files. Nevertheless, given that the upload was occurring, it was a safe bet to assume that credentials were being exchanged.

At this point, I could dive into the binary with Ghidra and attempt to walk through the obfuscated code to decrypt the credentials, but there is a way to short-circuit this whole process.

Think of it this way: at the end of the day, no matter how much obfuscation is used, the credentials need to be sent in plaintext (for insecure implementations) to the server. For that to happen, a method needs to be invoked somewhere in the code using these credentials.

This is where Frida and Objection comes in. You want to hook onto the method that makes that call, and dump the arguments to that method – which should hopefully be the credentials you are looking for.

First, you need to identify the method. Fire up Objection with objection --gadget <APPNAME> explore. Next, run ios hooking list classes to dump all available classes in the app. This is a huge list. Grep through the list and identify interesting classes. For example, I looked for the classes with AWS or Amazon in the name. As luck would have it, there was an AWSCredentials class, among other interesting class names. 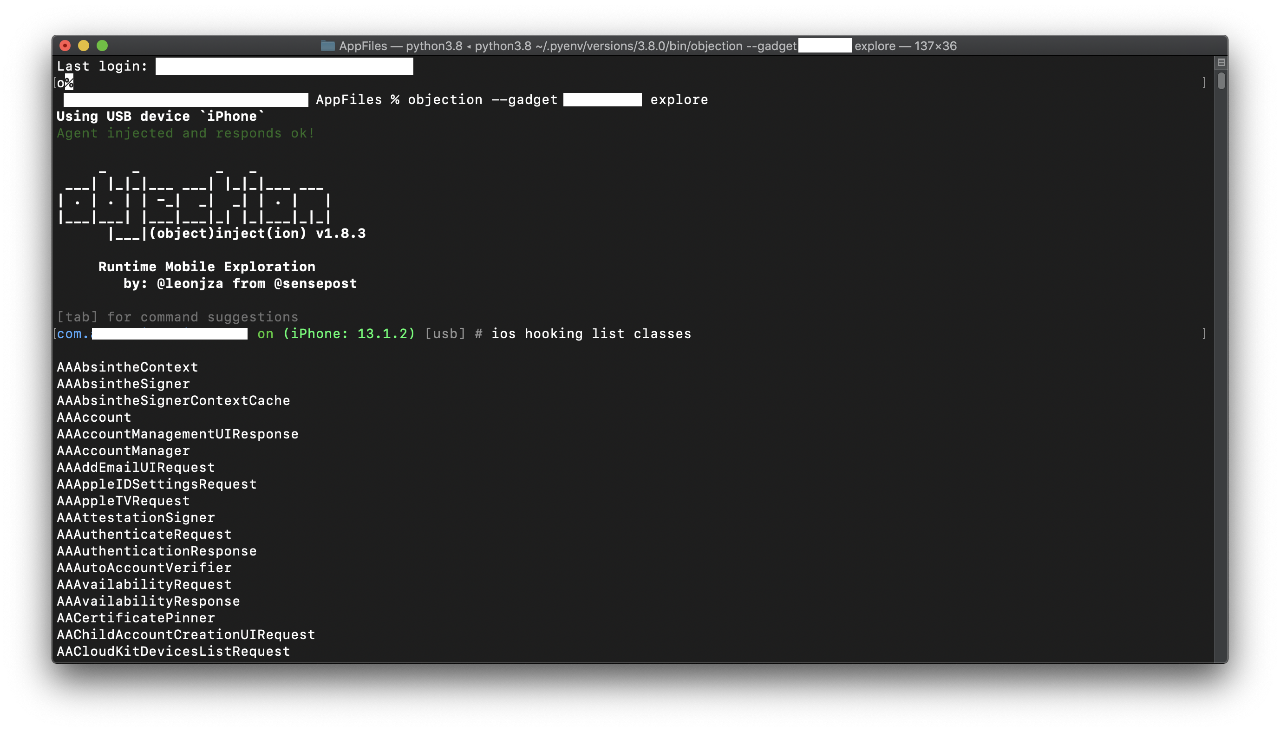 Next, you want to begin watching these classes. Run ios hooking watch class <CLASSNAME> in the Objection console for each class. Now, perform the action in the app where the potentially vulnerable credentials could be exposed. In this case, I performed the profile picture upload function in the app, which triggered the following response:

Awesome. So it looks like Frida successfully hooked onto the AWSCredentials class which includes the initKey and initSDK methods. When I performed the profile picture upload, the initKey method was called.

Now, we want to dump the arguments passed into the initKey class method. In objection, run ios hooking watch method "-[AWSCredentials initKey:]" --dump-args. Note that the format here for the class method is "-[<CLASSNAME> <METHOD>:]". Once again, I performed the profile picture upload in the app.

Success! Using dynamic analysis, I exposed the AWS keys used by the application. Of course, this meant that the app was using an insecure communication protocol with S3 as there are credential-less ways of implementing S3 uploads.

Hunting for secrets in iOS apps is a low-effort, high-payoff task that can help ease you into pentesting an application. (Un)fortunately, secrets management remains a hard problem especially for less-experienced developers, and continues to crop up as a recurring vulnerability. It's easy to forget that credentials are still exposed even when compiled into an app binary.