While browsing a SharePoint instance recently, I came across an interesting URL in the form https://<server>/_layouts/FormServer.aspx?XsnLocation=https://<server>/resource/Forms/template.xsn. The page itself displayed a web form that submitted data to SharePoint. Intrigued by the .xsn extension, I downloaded the file and started investigating what turned out to be Microsoft InfoPath’s template format. Along the way, I discovered parts of the specification that enabled loading remote payloads, bypassing warning dialogs, and other interesting behaviour.

You probably haven’t heard from InfoPath in a while - it was last bundled in Microsoft Office 2013, but continues to be available for Office 365 subscribers and is also embedded into SharePoint as a service. It has since been deprecated in favour of PowerApps, but thanks to Microsoft’s famous backward compatibility, continues to enjoy extended support up till 2026. In short, expect to see InfoPath continue popping up, especially in large enterprise environments.

InfoPath allows users to both design (saved as .xsn files) and fill forms. Additionally, as per Wikipedia, InfoPath supports a vast array of interactivity:

All this functionality creates a warren of rabbit holes to hide in and exploit, but InfoPath implements a fairly robust three-tier security level model: Restricted, Domain, and Full Trust. Each level has varying degrees of permissions, with Restricted forms unable to execute any managed code (C#, VBA) while Full Trust is able to execute any code. Meanwhile, Domain-level forms are limited to a defined publication domain for that form (e.g. a form published to a specific SharePoint URL) and security zones defined by Microsoft Internet Explorer.

Furthermore, typical workarounds like P/Invoke and loading unmanaged code are blocked; dangerous ActiveX controls and managed code assemblies without the AllowPartiallyTrustedCallersAttribute require either fully-trusted forms or cannot be loaded at all. This is problematic for Red Teamers because Full Trust forms need to be signed and create a warning prompt. Obscurity Labs’ InfoPath phishing article did not bypass this and instead relied on spoofing the self-signed certificate’s author name. 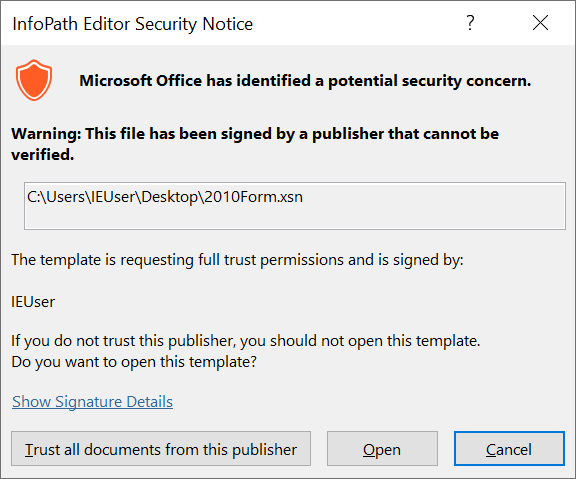 However, I was more interested in finding bypasses to the security model.

One interesting bypass I discovered was related to the managed code warning dialog. Whenever a form includes managed code (C#, VBA), the following dialog pops up and must be accepted before executing the code: 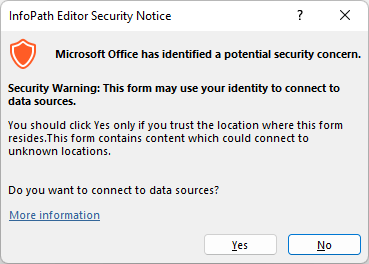 Domain-level forms can still execute managed code without dangerous assemblies like System.Diagnostics.Process, but can still leak information like the username and computer name through the Microsoft.Office.InfoPath.LoginName property. As such, it would be nice to do this without triggering the pesky dialog. To do so, it’s necessary to dive into the structure of the .xsn formats.

Unlike other Microsoft Office formats like .docx, which are essentially ZIP files containing XML manifests and resources, .xsn files are CAB compressed files. The CAB extracts to the following:

When managed code is added to the form, manifest.xsf refers to the compiled DLL as a rootAssembly file type:

In turn, Form_Calc.dll is bundled into the CAB as-is.

The manifest also explicitly declares the existence of managed code in the form:

Interestingly, by flipping the enabled property in the xsf2:managedCode node to no, the code now executes without having to click through the warning dialog! Not sure if this is a business logic error or a delayed popup…

When creating Domain-level form templates, InfoPath specifies the publishUrl property in the manifest:

This is used as part of the Domain security control, which restricts the form to the location specified at publishUrl. For example, if a Domain-level form is opened outside of the specified location, the following error will occur.

Weirdly enough, for certain classes of forms (e.g. without managed code but with included scripts like JScript), simply removing the entire publishUrl property in the manifest allows Domain-level forms to still be opened without triggering this error. This makes it easier to deliver higher-privileged Domain-level forms without falling back to the low-privileged Restricted forms.

One really interesting feature of InfoPath filler-mode forms (i.e. those meant to be filled on desktops rather than published to SharePoint or the web) is their support for custom task panes. Those are ostensibly custom HTML files users can embed into a side panel in InfoPath that opens automatically with the form. Both remote and embedded URLs can be used. For example, setting the task pane location to https://evil.com: 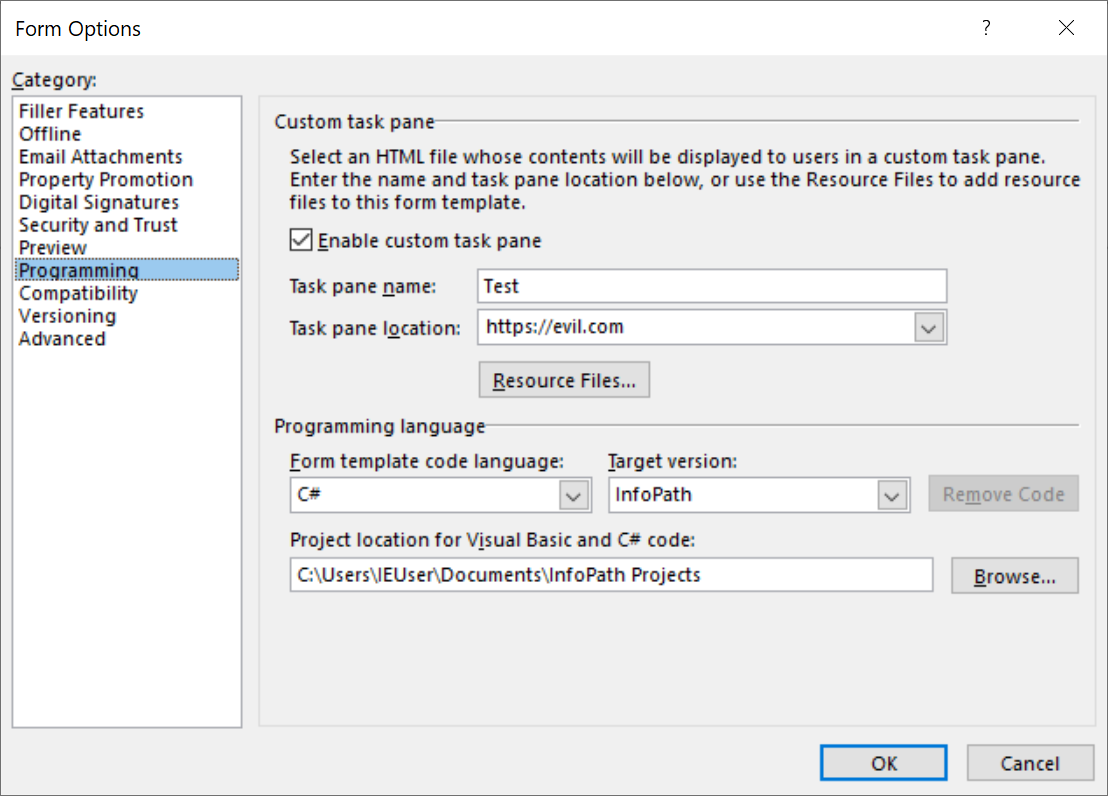 Will display the site as-is in the Filler view. 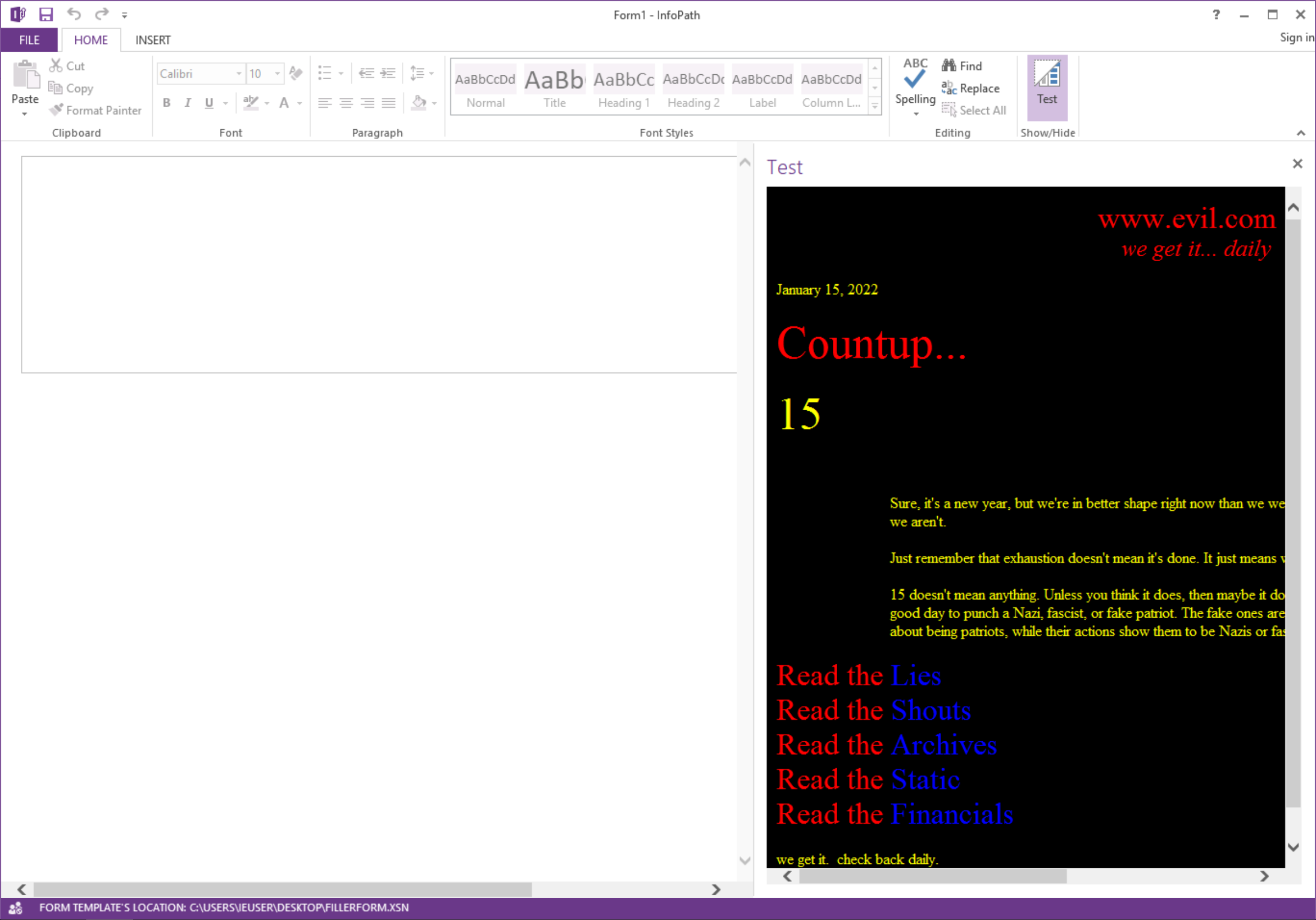 However, for remote URLs, this also triggers a remote connection warning. 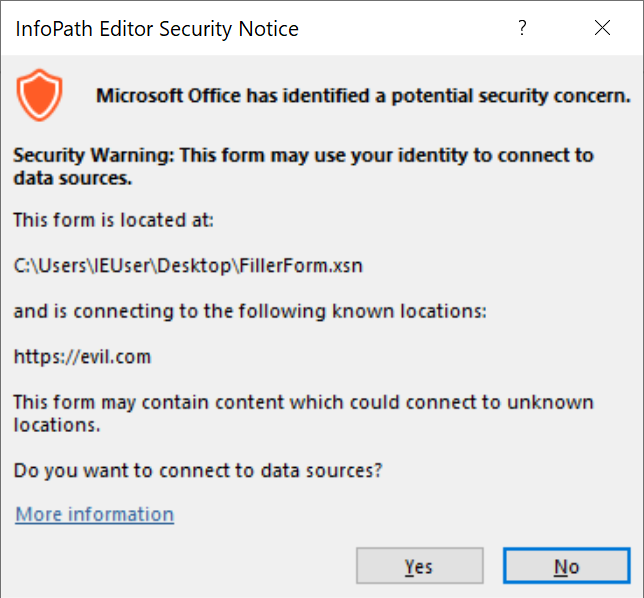 This can be easily avoided by referencing an embedded resource file instead.

Interestingly, even though the GUI and documentation only allows you to embed .html files, I could directly edit the href value of the xsf:taskpane node in the manifest to reference non-HTML files! Custom URIs were also supported.

Since the taskpane was opened in Internet Explorer Engine (RIP), I could also run .hta and JScript, as well as executables. For non-default IE files, this would prompt a typical Run/Save dialog. This works even in Windows 11 because the taskpane uses the Internet Explorer engine rather than the browser itself, which is still retained for exactly such compatibility scenarios. As Internet Explorer rides into the sunset, this increases the likelihood of old-school memory corruption bugs in the JScript engine or similar cropping up. As such, other than serving as a convenient way to deliver executable payloads, there’s the potential to deliver a no-click exploit.

With all this talk about embedding custom URL and HTML files, you might be wondering whether the ms-msdt custom URI/Follina vulnerability could be used here. Unfortunately, by the time I tested it, it no longer worked - perhaps because InfoPath does not bake in the same custom URI whitelist for ms-msdt as the other Office applications like Word. Nevertheless, the door remains open for similar attacks given the ability to embed custom URIs and HTML files using custom taskpanes.

Yet Another Payload Delivery Mechanism 🔗

Experimenting with InfoPath turned up a few ways I could exploit to deliver payloads or execute code. While the three-tier security model resisted naive attacks, I found ways to tweak the manifest directly to trigger interesting behaviour. Given how embedded resources like OLEs and backward compatibilities continue to plague Microsoft Office products, I think it’s useful to experiment with seemingly-deprecated products to discover zombie bugs and gadgets.