If you haven't heard about Facebook Gameroom, you're probably not alone. Released in November 2016, Gameroom was touted as a Steam competitor that supports Unity, Flash, and more recently HTML5 games. However, in recent years Facebook has turned its attention to its mobile and web platforms, especially with the rise of streaming. In fact, Gameroom is scheduled to be decommissioned in June this year. Fortunately for me, it was still alive and kicking at the time of the event. 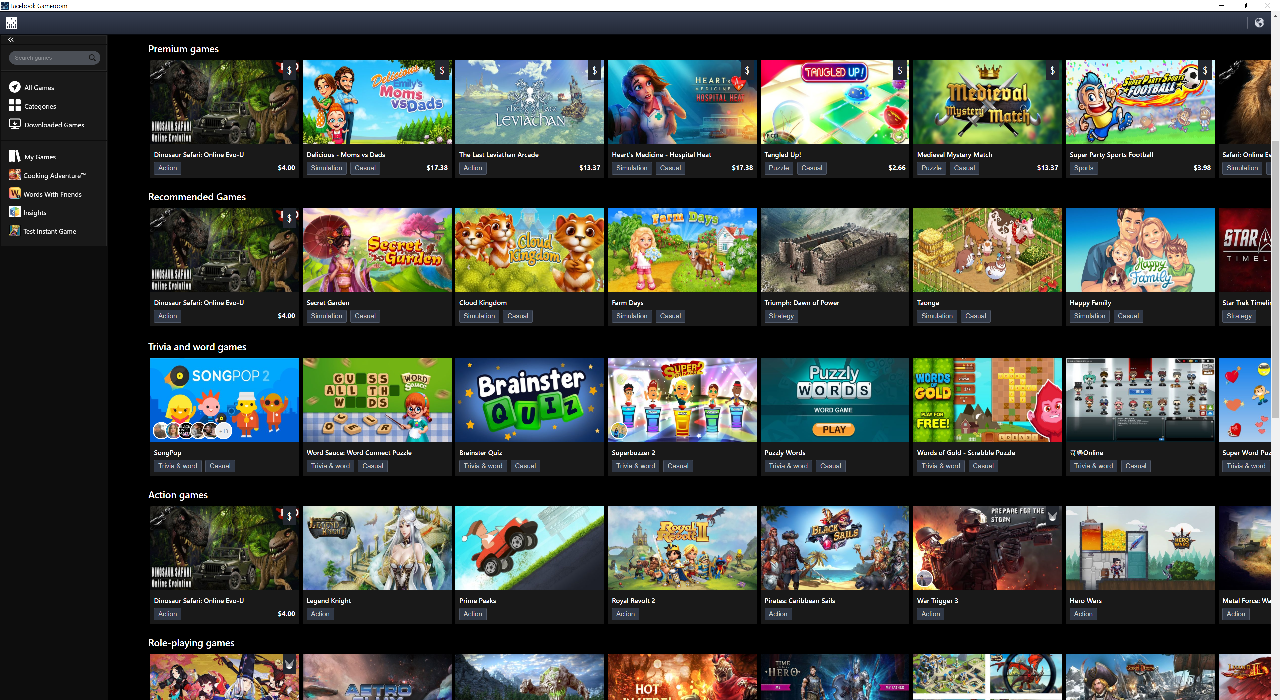 The first thing I noticed was that Gameroom did not require any elevated permissions to install. It appeared to be a staged installer, where a minimal installer pulls additional files from the web instead of a monolithic installer. Indeed, I quickly found the installation directory at C:\Users\<USERNAME>\AppData\Local\Facebook\Games, since most user-level applications are placed in the C:\Users\<USERNAME>\AppData folder. The folder contained lots of .dll files as well as several executables. A few things stood out to me:

The third point suggested to me that Gameroom was written in the .NET framework. The .NET framework allows programmes to be compiled into Common Intermediate Language (CIL) code instead of machine code, which can run in a Common Language Runtime application virtual machine. There are several benefits to this, including greater interoperability and portability of .NET applications. However, it is also a lot easier to decompile these applications back into near-source code since they are compiled as CIL rather than pure machine code.

For .NET assemblies, DNSpy is the de-facto standard. Reverse engineers can easily debug and analyze .NET applications with DNSpy, including patching them live. I popped FacebookGameroom.exe into DNSpy and got to work.

I began by searching for vulnerable or dangerous functions such as unsafe deserializations. If you've done the Offensive Security Advanced Web Attacks and Exploitation course, you would be intimately familiar with deserialization attacks. I won't go into detail about them here, but just know that it involves converting data types into easily-transportable formats and back, which can lead to critical vulnerabilities if handled badly. For example, Microsoft warns against using BinaryFormatter in its code quality analyzer with a pretty stark BinaryFormatter is insecure and can't be made secure.

Unfortunately, BinaryFormatter popped up in my search for the “Deserialize” string. 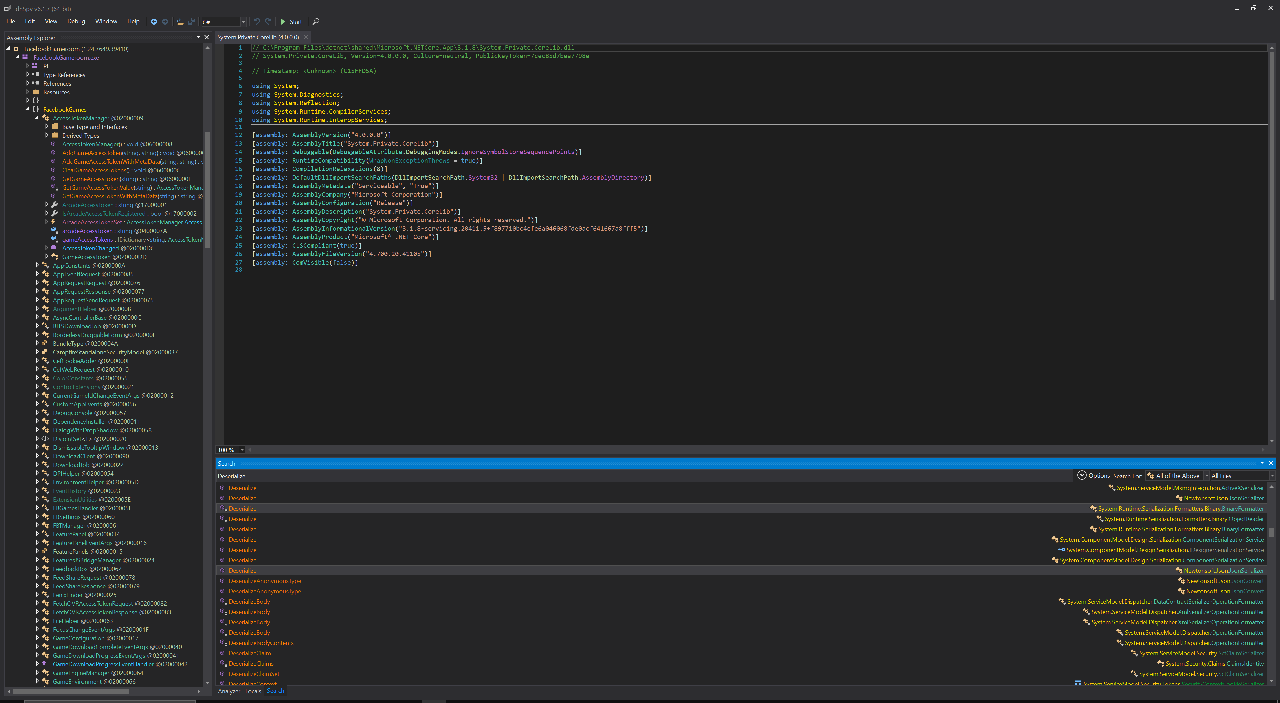 However, I needed to find the vulnerable code path. I right-clicked the search result, selected “Analyze”, then worked up the “Used By” chain to locate where Gameroom used BinaryFormatter.Deserialize.

Eventually, this led me to the System.Configuration.ApplicationSettingsBase.GetPreviousVersion(string) and System.Configuration.ApplicationSettingsBase.GetPropertyValue(string) functions. Gameroom used the deserialization function to retrieve its application settings at startup – but from where? Looking back at the installation folder, I found fbgames.settings, which turned out to be a serialized blob. As such, if I injected a malicious deserialization payload into this file, I could obtain code execution. Before that, however, I needed to find a deserialization gadget. With a bit more searching based on a list of known deserialization gadgets, I discovered that Gameroom used the WindowsIdentity class.

With that, I worked out a code execution proof-of-concept:

Although it was exciting to get code execution, upon further discussion with the Facebook team we agreed that this did not fit their threat model. Since Gameroom executes as a user-level applications, there's no opportunity to escalate privileges. Additionally, since overwriting the file required some level of access (e.g. via a malicious Facebook game that would require approval to be listed publicly), there was no viable remote attack vector.

I learned an important lesson in the different threat landscape posed by native applications – search for a viable remote attack vector first before diving into the code-level vulnerabilities.

Scheming My Way to Success

Have you ever clicked on a link from an email and magically started Zoom? What exactly happened behind the scenes? You just used a custom URI scheme, which allows you to open applications like any other link on the web. For example, Zoom registers the zoommtg: URI scheme and parses links like zoommtg:zoom.us/join?confno=123456789&pwd=xxxx&zc=0&browser=chrome&uname=Betty.

Similarly, I noticed that Gameroom used a custom URI scheme to automatically open Gameroom after clicking a link from the web browser. After searching through the code, I realized that Gameroom checked for the fbgames: URI scheme in FacebookGames\Program.cs:

If Gameroom had been opened with the fbgames:// URI, it would proceed to parse it in the SchemeHelper class:

Unfortunately, it appeared that even though I could launch any arbitrary file in the system through a URI like fbgames://launch_local/C:/evilapp.exe (as documented by Facebook), this would be blocked by a confirmation dialog. I tried to bypass this dialog with format strings and non-standard inputs, but couldn't find a way past it.

I returned to the gameid path, which opened a Facebook URL based on the game ID in the URI. For example, if you wanted to launch Words With Friends in Gameroom, you would visit fbgame://gameid/168378113211268 in a browser and Gameroom would open https://apps.facebook.com/168378113211268 in the native application window.

However, I realized that GetGameSchemeId, which extracted the ID from the URI that would be added to the apps.facebook.com URL, did not actually validate that the slug was a valid ID. As such, an attacker could redirect the native application window to any other page on Facebook.

For example, fbgame://gameid/evilPage would redirect the Gameroom window to https://apps.facebook.com/evilPage.

But how could I redirect to attacker-controlled code in Gameroom? There were a few options, including abusing an open redirect on apps.facebook.com. Unfortunately, I did not have one on hand at that time. Another way was to redirect to a Facebook Page or ad that allowed embedded iframes with custom code.

At this point, I hit a roadblock. Revisting the code of GetGameSchemeId, it took only the first slug in the URI path, so fbgame://gameid/evilPage/app/123456 would direct the native application window to https://apps.facebook.com/evilPage and discard /app/123456.

Fortunately, there were additional code gadgets I could use. The version of Chrome used in Gameroom was really outdated: 63.0.3239.132 – the current version at the time was 86.0.4240.75. As such, it did not support the new version of Facebook Pages. The classic Facebook Pages version accepted a sk parameter such that https://apps.facebook.com/evilPage?sk=app_123456 led to the custom tab with the attacker-controlled code at https://apps.facebook.com/evilPage/app/123456!

But how could I inject the additional query parameter in my custom scheme? Remember that Gameroom discards anything after the first URL slug, including query parameters. Or does it? Looking back at FacebookGames/SchemeHelper.cs, I found GetCanvasParamsFromQuery:

Before passing on the custom URI, GetCanvasParamsFromQuery would look for the canvas_params query parameter, serialize it as a JSON dictionary, and convert it into the new URL as query parameters.

This led me to my final payload scheme. fbgames://gameid/evilPage?canvas_params={"sk":"app_123456"} would be parsed by Gameroom into https://apps.facebook.com/evilPage/app/123456 in the native application browser window, which would then execute my custom JavaScript code.

As mentioned earlier, the threat landscape for a native application is very different from a web application. By redirecting the embedded Chrome native window to attacker-controlled Javascript, an attacker could proceed to perform known exploits on the 3-year-old embedded Chromium browser. Although a full exploit had not been publicly released, I was able to leverage the CVE-2018-6056 proof-of-concept code to crash the Chrome engine via a type confusion vulnerability.

Alternatively, an attacker could create pop up boxes that were essentially legitimate native MessageBoxes to perform phishing attacks, or attempt to read the cached credentials file. Fortunately, unlike Electron applications that integrate Node.JS APIs, CefSharp limits API access. However, it still remains vulnerable to Chromium and third-party library vulnerabilities.

Facebook awarded it as High and subsequently patched the vulnerability, pushing me into the top-10 leaderboard for Bountycon. Although Gameroom will be shut down soon, it definitely left me with some fond memories (and practice) in basic offensive reverse engineering. For newcomers to application reverse engineering, Electron, CefSharp, and other browser-based frameworks are a good starting place to test for web-adjacent weaknesses like cross-site scripting and open redirects, while exploiting desktop-only code execution vectors.